The Covid-19 pandemic that hit the UK and the rest of the world in early 2020 has exposed, in an unprecedented manner, stark divisions in living conditions along a number of dimensions – including income and wealth, but also generational, geographic, gender and ethnic affiliations.[1] The condition of homes was largely reassessed in light of whether they were decent enough to live in, in terms of floor space, access to a garden, extent of maintenance – respectively, neglect – of the premises, and level of congestion of the neighbourhood, for instance. Too often, obviously, no or few improvements in living conditions can be made expeditiously, determined as they are by long-term policy choices. We know little, still, about what informs these decisions on the part of politicians, and what kind of incentives they respond to.

A direct way to get at this issue is to look at the ways in which politicians – in particular, British MPs – talk about housing and housing policy in Parliament (see e.g. Kohl, 2018). In an ongoing WEALTHPOL project, we are investigating the extent to which MPs change their expressed policy preferences with regard to housing as a response to a variety of factors – including time, partisanship, and housing prices in their constituency. To do so, we use text analysis methods on a corpus of all debates about housing in the House of Commons from 1996 to 2018, and look at whether different types of MPs speak differently about certain topics. We use a class of methods called Structural Topic Models, allowing us to uncover “topics”, i.e. latent themes that structure the corpus of debates.[2] A few preliminary but interesting results emerge, illustrated and explained below.

First, timing matters (see Figure 1). Some topics are “hot” at a given time only – such as the so-called bedroom tax, which dominated housing-related debates in the House of Commons in 2012, but was quasi non-existent before and after. Others topics, by contrast, are omnipresent in MPs' expressed concerns throughout the period under study – such as issues related to private-sector housing which include, among other things, landlord-tenant relations and licenses. 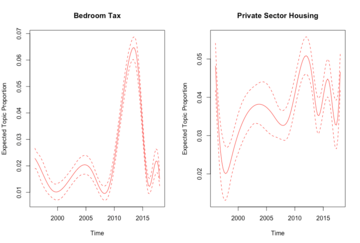 Second, partisanship matters. This is the case at two levels: partisanship informs how often different MPs discuss specific topics (see Figure 2a). Relying on our corpus, we find for instance that Labour MPs are more likely to touch upon topics that have to do with the social facet of housing – including homelessness, housing benefits, and housing support for vulnerable populations. This means that they are literally more vocal in Parliament about these issues. Furthermore, partisanship also determines in what way different MPs debate certain topics, by which we mean which words they use to discuss specific matters (see Figure 2b). We see, for instance, that when talking about home ownership – a topic that encompasses the buying and selling of homes, and access to property – Conservatives MPs’ preferred word is “buy” whereas that of Labour MPs is “afford”. This suggests that when debating home ownership, Conservative MPs are more inclined to emphasize concerns related to the right of individuals to buy homes, while their Labour counterparts seem more keen on stressing people’s ability to afford property in the first place. While only indicative, this hints at partisan differences in policy preferences that are expressed in various ways, through the very fact of discussing specific issues and doing so often rather than rarely, but also through the choice of words MPs make. 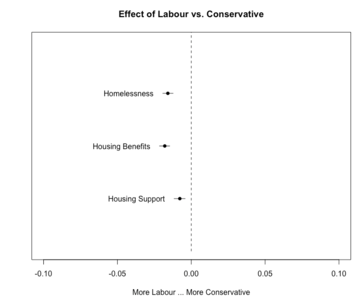 Figure 2a: difference in topic prevalence by party 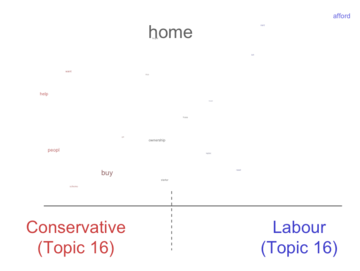 Figure 2b: difference in perspectives about home ownership by party

Third and last, some things matter beyond time and partisanship – and we think housing prices (and housing price inequality) is among them. As pointed out by Jacob Nyrup in a blog article from September 2019, housing prices vary across constituencies represented by Labour and Conservative MPs respectively – and so does, by extension, wealth inequality. This has consequences for MPs’ preferences, and therefore should affect their policy stance in Parliament. How do housing prices moderate the relationship between partisanship and preferences for specific housing policies?  We are now investigating these questions, using a combination of Structural Topic Modelling and original dictionary methods. Stay tuned!

[1] On this, see the “Lockdown Living” report published by the Nuffield Foundation on July 3, 2020.

[2] For more details on structural topic modelling and its use in political science, see e.g. Roberts et al. (2019).