What about the politicians? Changes in housing prices and changes in policies

As I discussed in my last blog, we have seen a highly unequal surge in housing prices, increasing wealth dramatically in some areas, while leaving other areas behind. In the paper “Sheltering Populists? House Prices and the Support for Populist Parties” we argue that there is strong evidence of a connection between house prices and support for right-wing populist parties in the Nordic countries. Thus, it seems that voters do respond politically to changes in wealth inequality. However, the paper does not discuss the other side of the political equation, namely how do politicians react to changes in house prices?

We might expect politicians to react politically to changes in housing prices for two reasons. First, if they are house owners and landlords themselves, they get a personal economic benefit from increases in house prices. Therefore, they may be inclined to skew housing policies in ways which protect their own financial interests. A working paper by Tom O’Grady (2019) shows that one quarter of British MP’s are landlords, while Ornstein et. al (2019) demonstrate that the bulk of American politicians are houseowners. We may therefore fear that this overrepresentation of the wealthy in parliament can bias housing policies towards the preferences of a narrow elite. However, a second and - from the voter’s perspective – more positive mechanism is that politicians with re-election in mind may adjust their policies, so they respond to the changing preferences of their constituency. Consequently, we would expect politicians who represent areas with stagnating or decreasing house prices to become more in favour of more redistributive housing policies - and vice versa.

Our paper on housing prices and support for populist parties does not include the recent 2019 election in Denmark, where the right-wing populist party the Danish People’s Party saw their support plunge. There are many reasons for the drastic decrease in support for the Danish People’s Party. An explanation which was largely overlooked, nonetheless, may be that the Social Democrats, which traditionally have much support in the big cities, tried to cater to voters in less populated areas. Examples of slogans up to the election include “Denmark is too small for big differences” and “Let us unify Denmark again”. This was backed up by campaign promises such as more investment in rural areas, more affordable housing and reforms of inheritance and wealth taxes. Time will show whether these promises are fulfilled. In any case, the creation of a new ministry, the Ministry of Housing, is a reassuring sign. The new minister, Kaare Dybvad Bek, has participated actively in the debate on housing and written a book on how the government should stop centralization and instead focus on the outskirts. This indicates that there may, at least in Denmark, be some response from the political system. However, Denmark does not lend itself well to a big n-analysis of how changes in housing prices affect policy positions of individual politicians since it is hard to connect a politician to a specific local area. 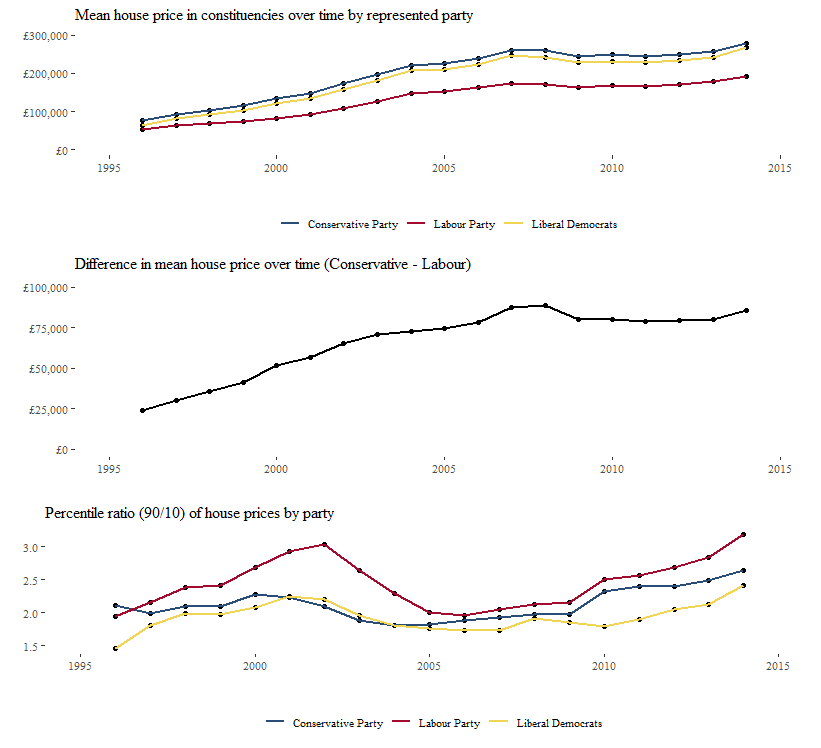 In a new WEALTHPOL project, we therefore turn to the case of the United Kingdom, where each MP represents a specific constituency. While the main results will have to be the topic of a later blog, interesting patterns are seen in the figure above. The top panel shows that housing prices have increased broadly in constituencies represented by each of the three main parties. The second panel shows that this increase has been much more dramatic in conservative constituencies than in labour constituencies. The third panel shows inequality by showing the 90/10 house price for the three main parties. For example, we see that the houses at the 90th percentile for Labour constituencies were twice as expensive as those at the 10th percentile in 1996. The graph shows that Labour are representing the most diverse constituencies in terms of house prices, and that after 2005 the ratio has been increasing for all three parties. Thus, all parties have MPs, which represent areas where housing prices are booming, but also areas with stagnating house prices. The question we turn to now is how MPs react to these changes in housing prices. In particular, do politicians in stagnating areas become more positive towards wealth redistribution - and vice versa - and to what extent does party affiliation and home ownership moderate these stances? These are some of the questions we are currently working on answering. Watch this space to find out.

O’Grady, Tom (2019): A Property-Owning Democracy: Does being a Landlord Affect British MPs' Behaviour on Housing Policy? Presented at EPSA 2019