Sheltering Populists? House Prices and the Support for Populist Parties

In the past two decades, we have seen dramatic developments in both the political and the economic sphere in Europe. Right-wing populist parties such as the Danish People’s Party in Denmark, La Lega in Italy and le Rassemblement National in France have increased their vote shares and disrupted the traditional party systems. Simultaneously, there has been a highly unequal surge in housing prices, increasing wealth dramatically in some areas, while leaving other areas behind. Ben Ansell (University of Oxford), Frederik Hjorth (University of Copenhagen), Martin Vinæs Larsen (Aarhus University) and I connect these two trends in our new working paper Sheltering Populists? House Prices and the Support for Populist Parties.

In the paper, we show that there is strong evidence of a connection between house prices and support for right-wing populist parties in the Nordic countries. In other words, areas which did not experience a surge in housing prices became the strongholds of the right-wing populist parties, and vice versa. This is shown in figure 1, which plots the relationship between precinct-level support for the Danish People’s Party and housing prices for each of the 10 national elections in the period 1998-2015:

However, this relationship is solely correlational, indicating that the two variables move together. Why do we have a reason to believe there is a causal relation between those two variables? In the paper, we argue that two key channels connect changes in housing prices to voting for populist parties, namely individual effects directly impacting homeowners, and geotropic effects reflecting communities’ relative status. The individual effect goes through one’s pocketbook, so that when house prices are rising, we might expect homeowners to be happier with political incumbents; whereas when prices are declining, they ought to be less happy. House prices are also a proxy for the relative wealth and economic fortunes of different localities. We argue that people care strongly about their local community, and when house prices are decreasing, it signals a decline in the relative status of their community. This decline may be very visible in everyday life via, for example, shops shutting down. Assuming that people then make a mental comparison with those parts of the country which are doing better, and that the latter are associated with mainstream elites, this provides another channel explaining greater support for populist right-wing parties. This is the geotropic effect.

To tests these claims, we conduct empirical analyses using data from four Nordic countries (Denmark, Sweden, Norway, and Finland). In each of these countries, we focus on the current dominant right-wing populist party. These are the Danish People’s Party (in Denmark), the Sweden Democrats (Sweden), the Progress Party (Norway), and the True Finns (Finland). We have access to the most detailed data in Denmark, where we use electoral precinct-level data. In Sweden, Norway and Finland, we use municipal-level data. We link the support for the populist parties to housing prices using a first difference model with election year fixed effects. In other words, changes in the support for the populist party are modelled as a function of changes in housing prices. Furthermore, we include detailed controls for changes in the urbanization, ethnic diversity, economic standing and labour markets for the different geographical areas. The key estimates from these models are presented in Figure 6. 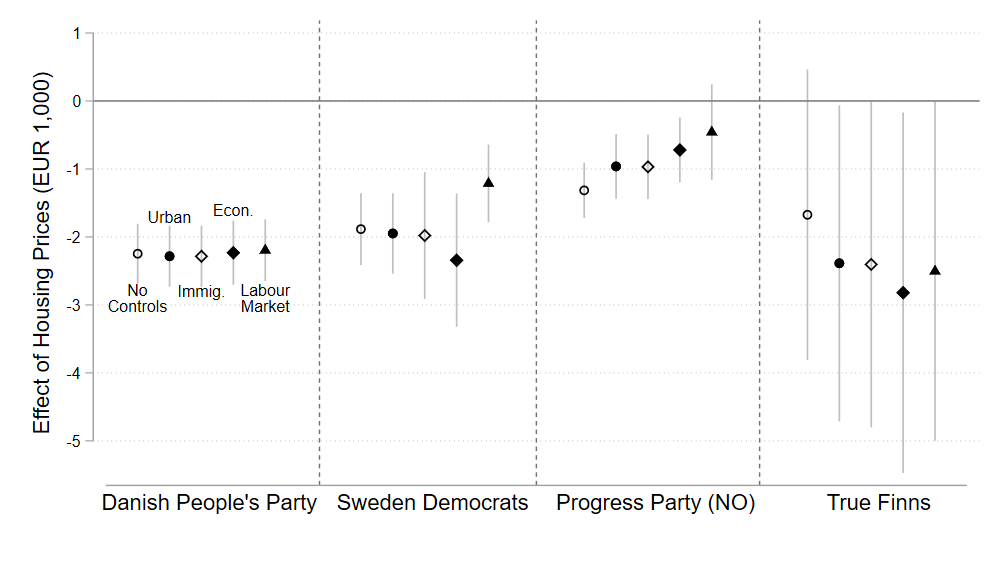 The estimates can be interpreted as a generalized difference-in-difference estimate, which shows what happens to the support for the party in areas where prices grow compared to places where prices remain stagnant. For example, in Denmark this implies that an increase in a precinct’s housing prices of EUR 1,000 will decrease support for the Danish People’s Party by roughly 2 percentage points. The results for Sweden are similar to Denmark, implying that when prices per square meter in a municipality increases with 1,000 EUR, the Sweden Democrats lose two percentage points of their support in the municipality. The estimated effects for Norway are in the same direction, indicating that lower housing prices are related to more support for the Progress Party, but the effects are smaller than for Denmark and Sweden. The estimated effects for Finland are a bit larger than in Sweden and Denmark, but they are less precisely estimated.

In sum, we find consistent evidence of a negative relationship between changes in housing prices and support for populist parties in the four Nordic countries. One may wonder, nonetheless: why do we find a weaker relationship in Norway than the remaining countries? One reason for this might be that the Progress Party in Norway is not a purely right-wing populist party, but instead can be seen as a hybrid between a populist party and a more traditional conservative party. It has existed since 1973 and has been a part of government since 2013. The other populist parties are much younger and have not served in government during the period included in the analysis. As a result, the Progress Party might not be able to capitalize on the Norwegian voters’ frustrations with stagnant housing prices in the same way than the remaining Nordic populist parties. One may speculate whether this was also the case for the Danish People’s Party in the recent in election in 2019, which is not included in our analysis.

This blog only presents a portion of the analyses carried out in the paper. The working paper will be uploaded later in the year and will go much more into detail with the mechanism. Overall, our article suggests that citizens’ discontent with local economic decline and increases in regional wealth inequality are important drivers of the support for right-wing populist parties. Whether the increased political power of right-wing populist parties means that the political system will address these economic sources of discontent remains an open question.