The “Yellow Vests” protests which erupted in France in November 2018 have been widely described as unexpected and exceptional in their form, intensity, and persistence over time. Analyses of the outputs from the Grand Débat National and the alternative “Vrai Débat” that ensued confirm that fiscal justice and inequality were major concerns expressed at the national level. Both the fuel tax, which crystallised a lot of the media and political attention, and the net wealth tax on the richest individuals (Impôt sur la Fortune), which was partly abolished by Emmanuel Macron in December 2017, emerged as key points of frustration with the government’s fiscal policies.

While much attention has been devoted to understanding the determinants of the movement both at the individual and macro levels (Guerra et al. 2019; Algan et al. 2019), few studies have focused on the role of local socioeconomic conditions, and in particular of inequalities in the distribution of wealth at the local level, in shaping individuals' satisfaction and their propensity to mobilise against the political status quo.[1] In a WEALTHPOL working paper with Jonas Markgraf, we therefore ask whether there is a relation between the level of wealth and wealth inequality, and the incidence and intensity of the “Yellow Vests” movement. We show that in addition to socio-demographic and political factors, the geography of wealth inequality, proxied for by housing prices, contributes to shaping individuals’ (dis)satisfaction and correlates with measures of “Yellow Vests” mobilisation at the commune and département levels.[2]

Measuring “Yellow Vests” mobilisation is an incredibly challenging tasks, as there is no reliable and comprehensive data on where and when the protests happened, nor on how many people took part in them.[3] This is due to the fact that the movement has been extremely decentralised in its organisation, with protests scattered across France, particularly in the first weeks of social unrest. Furthermore, participants mainly rely on social media, and in particular on Facebook groups, to organise their actions. These groups, however, frequently change names, location and privacy features, making tracking their origin and number of members in a consistent way difficult. Lastly, the stark divergence between the official numbers of events and protesters announced by the Ministry of the Interior, those broadcast by the media and various independent institutes, and those reported by the “Yellow Vests” themselves, highlights that it is virtually impossible to get a definitive count of the number of individuals who take part in protests.

We therefore take an innovative approach, and rely on two sources of online data to capture the incidence and intensity of “Yellow Vests” mobilisation across the territory.[4] The first is Facebook groups data, compiled by the fact-checking platform Les Décodeurs hosted by newspaper Le Monde. The second one is geo-localised data extracted from the Rally Map which was available on the “Yellow Vests” official website on November 17, 2018. The maps below present these indicators – number of Facebook group members by département, normalised by population size, and location of planned blockades – and contrasts them with what we see as determinants, namely housing prices - in level and inequality. 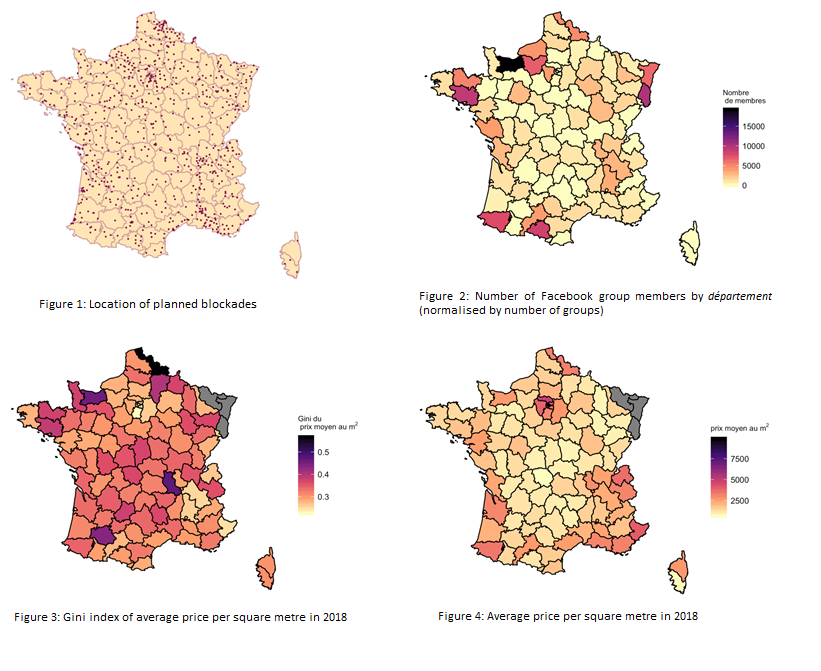 We proceed to estimate linear regressions (at the département level) and logistic regressions (at the commune level) to study the effect of our indicators of wealth inequality on the intensity of protest, captured by the number of blockades and the number of active Facebook group members; and on the probability that a commune is a place of mobilisation respectively. In each estimation, we control for common determinants of protest, including population, population density, the main transport mode used by inhabitants, unemployment, education levels, and the median living standard. We find that more wealth inequality (i.e. more housing prices inequality) is associated with a stronger probability of mobilisation at the commune level, and a more intense mobilisation at the département level. Our results further suggest that higher housing prices are associated with a weaker probability of mobilisation, at the commune level only. Though this evidence is purely correlational, a few takeaways emerge: first, wealth inequality matters for protest behaviour. Second, the geographic scale of the analysis is also relevant.

In a subsequent part of this paper, we are looking at how perceptions of fiscal (in)justice – such as individuals’ opinions regarding past and current levels of inequality, their satisfaction with the government’s fiscal policy choices, and their own tax preferences – may interact with wealth inequality to help explain the emergence of this particular movement of political contestation and, beyond this, shed some light on the political consequences of the geography and dynamics of wealth inequality.

[1] An exception in that respect is the note of the Conseil d’Analyse Economique published in January 2020 by Algan et al. (http://www.cae-eco.fr/Territoires-bien-etre-et-politiques-publiques-499).

[2] Data on housing prices comes from the Base Demande de Valeurs Foncières (DVF), an administrative database compiling data from notarial deeds and cadastral information for every real estate transaction between 2014 and 2018 (three départements are excluded: Bas-Rhin, Haut-Rhin and Moselle). For references on why housing prices matter in shaping individuals’ political satisfaction and preferences, see Ansell (2014), Ansell & Adler (2020) and Larsen et al. (2019).

[4] The working paper analysis also includes administrative data on the number of crimes and delinquency incidents reported by the police and gendarmerie nationale from the Statistics Division of the Interior Ministry, by month and département. We then rely on a Structural Bayesian Time Series model, using the categories of crimes and offences not related to the movement  to estimate its effect on