Who oversees our wealth (policies)?

Part of the WEALTHPOL project looks into government policies affecting the taxation and transfer of wealth. One may wonder, however, who are the politicians in charge of implementing these policies?

This blog uses a new dataset, WhoGov, which I have created as a part of my PhD project (Nyrup & Bramwell 2020). WhoGov is the largest available dataset on members of governments, including all cabinet ministers, and provides bibliographic information on cabinet members in July every year for the period 1966-2016 in all countries with a population of more than 400,000 citizens. A paper describing the dataset can be found here.

The dataset provides information on the minister’s official title. There are no instances of a Minister of Wealth in our dataset (although both Libya and Sudan for a brief period have had a Minister for Animal Wealth). In general, it is also very rare to have a Minister of Taxation. Denmark and a handful of former Soviet States, such as Belarus and Azerbaijan, are the only countries with a designated Minister of Taxation in our dataset, while some Commonwealth Nations have a Minister of Revenues. Thus, in most cases, we must look elsewhere to identify the ministers in charge of implementing and executing policies for regulating wealth and taxation.

This domain of competence is most often located within the Ministry of Finance. For example, in the United Kingdom the Chancellor of the Exchequer oversees taxation, while it is the Secretary of the Treasury in the United States. These are both equivalent to the Minister of Finance (MF) in other countries. I therefore focus on the MF for the remainder of this blog.

In the figure below, we see how MFs compare against other types of ministers over time along four variables, namely age, share of female individuals, experience in government, and share of independent ministers (unaffiliated with a party). The average MF is in his/her early 50s, which is about the same as other cabinet ministers. This is constant for the whole period. However, we notice that they differ from other types of ministers on the other dimensions. While there has been a large increase in the share of female cabinet ministers generally, this is true to a much lesser extent for the share of female MFs. Furthermore, MFs tend to have more governing experience than other ministers.[1] At last, MFs are less likely to represent a party – especially after large geopolitical crises, such as the Great Recession. This supports the view that technocrats are more likely to be appointed during major economic crises (Alexiadou and Gunaydin, 2019). 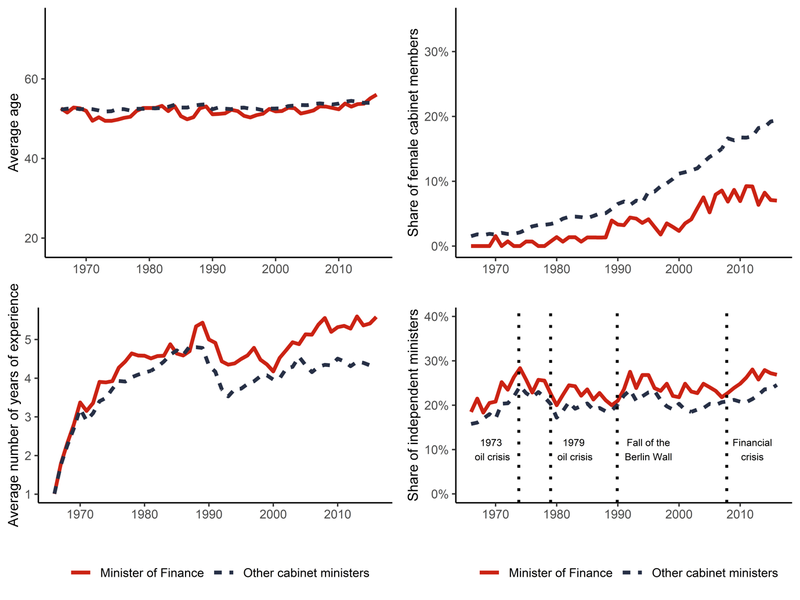 There are also large regional differences in who the Minister of Finance is. This can be seen on the maps below, which display the averages of the four variables for the period 2000-2016. In other words, if the value is 20 percent for the share of female MFs, then there has been a female MF for 20 percent of the time in 2000-2016. We do not have complete coverage for the age variable, but MFs tend to be youngest in Eastern and Northern Europe, while they are well above 60 years of age in much of Asia. Moreover, most countries, including the United States and the United Kingdom, have had no female MFs. The exceptions are mainly in Northern Europe, Eastern Europe and Sub-Saharan Africa. Independent MFs are most common in South America, Eastern Europe and autocracies without a party system, such as Saudi Arabia. 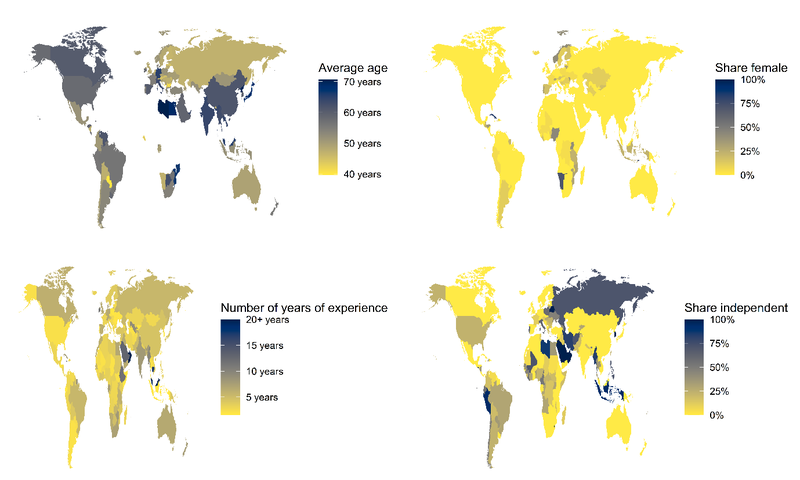 Overall, MFs are therefore overwhelmingly male, middle-aged, relatively experienced bureaucrats, and are more likely to be the result of technocratic appointments, which might make them less accountable to the electorate. It is difficult to know outright how this affects our wealth policies. On one hand, some of these characteristics, such as experience and independence, may signal competence. However, the main take-away is that the people overseeing our wealth are very different from the average voter, and we can speculate as to whether this may skew the policies governing our wealth away from the preferences of the average citizen and towards people who look more like the MFs.

This data will be made public after the summer, enabling researchers to investigate this and countless other research questions, while WEALTHPOL is looking further into the creation and implementation of government policies affecting the taxation and transfer of wealth.

Nyrup, J. & Bramwell, S. (2019). “Who governs? A new global data set on members of cabinets.” The working paper is retrieved from https://www.dropbox.com/s/ophg2i81kyjqzyi/Authoritarian_Ministers_Datase....

[1] It should be noted that the measure of experience is affected by the availability of the data. The dataset starts in 1966, and we do not know whether a person was in the cabinet before then, causing the counter to start in 1966.