Although the boom in property prices relative to incomes since the 1990s has been one of the core economic trends of the past two decades, social scientists have only recently turned to examine property prices as determinants of political preferences and behaviour. Early work, beginning with Kemeny (1981), drew out a potential connection between housing markets and support for the welfare state. Kemeny argued that the rise in private homeownership over the twentieth century – and accelerating since 1945 – was creating a class of citizens who would depend less on the state for support, having a valuable asset to fall back on, and who would be more tax-sensitive given the costs of affording down-payments and mortgage payments associated with the purchase of a property. Castles (1998) and Conley and Gifford (2006) both demonstrated a cross-national negative relationship between homeownership rates and the size of government.

Nevertheless, the political and social effects of the housing market are not about ownership alone. Property prices also matter, both absolutely (as returns to residential in- vestment) and relatively (in terms of affordability). Indeed, the major shift of the past few decades has not been in ownership rates, but the relative price of housing. So how might housing prices matter for political preferences?

Relative levels – housing affordability – matter in a number of ways. On the negative side, rising house prices may make it ever harder for non-homeowners to afford to get on the property ladder. In many countries, median incomes have been mostly stagnant since 2000, whereas median property prices have risen dramatically. Even if affording a mortgage remained constant due to declining interest rates, higher property prices still mean higher down-payments for housing out of stagnant salaries. In many countries, this has made it ever harder for people to move from the private rental market to ownership. For example, in the UK, housing affordability for first-time buyers has been steadily worsening since the 1990s, rendering it impossible for low-income younger families to enjoy the security of homeownership and lucrative investment opportunities (data from the Office for National Statistics, 2018). However, relative price increases also have positive effects for many people. Homeowners, whose salaries may also have stagnated, will be receiving returns on their most important asset far in excess of their labour market income growth. The housing boom has created legions of dollar millionaires across the industrialized world. People with relatively modest incomes have found themselves owning properties that are several multiples of their annual income in value. For these people, the ‘affordability crisis’ does not feel like a crisis – it feels like a boon.

So, housing becoming more unaffordable relative to incomes has countervailing effects on people’s material circumstances. What does this mean for political preferences? To answer this question we examine the electoral consequences of housing costs and unaffordability in the UK. Our dependent variable is (changes in) the vote share of the Conservative Party at the parliamentary constituency in the General Elections of 2010, 2015, 2017, and 2019. Our variable of interest is housing affordability, calculated as the median house price divided by median yearly income at electoral constituency level. As economic controls for each electoral constituency and year we use unemployment rates. Data on house prices comes from the UK Land Registry and includes all sales of houses and apartments in each constituency. Finally, we obtain demographic data from the 2011 Census in England and Wales (ethnicity, age structure, and immigration status). 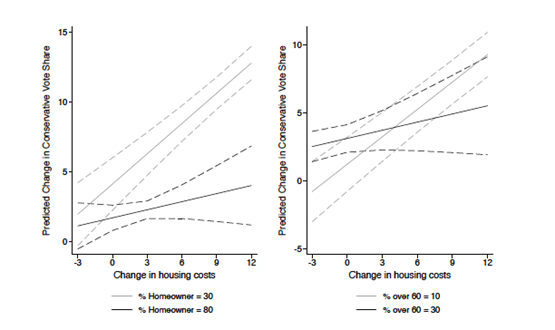 The left graph in the figure above shows the predicted change of support for the Conservative party as a function of changes in housing costs at places with low and high homeownership rates. The relationship is sizable for constituencies with low homeownership rates, while the effect of housing costs on Conservative vote share is reduced among constituencies with high homeownership rates. However, in both cases there is always a positive effect on Conservative support of rising house prices. A similar story can be told for the right graph in the figure above. The elasticity of the Conservative vote share is rising in increasing housing costs. However, this effect is more pronounced for constituencies with younger residents. Without survey data we cannot ascertain whether this is driven by younger citizens moving to the Conservatives but there is little evidence that the left-wing Labour party benefited from rising unaffordability, even in younger areas where one might have expected more support for Corbynism.

Castles, Francis. 1998. “The really big trade-off: home ownership and the welfare state in the new world and the old.” Acta Politica 33:5-19.