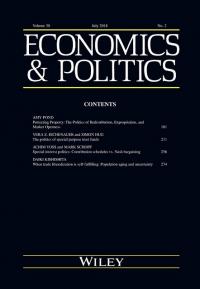 In recent years, global imbalances have channeled the excess savings of surplus countries toward the real estate markets of deficit countries. By consequence, the deficit countries that attracted lots of foreign capital experienced large run‐ups in house prices, whereas most surplus countries that exported capital exhibited flat or slow house price growth. We first use new house price data and a novel instrumental variable design to show the causal relationship between housing prices and capital inflows, particularly through debt bonanzas. We then argue that international capital flows affect the fiscal policy preferences of both voters and political parties by way of their impact on housing prices. Where capital inflows are large and housing prices are rising, we expect voters to respond by demanding both lower taxes and less publicly‐provided social insurance because rising house prices allow homeowners to self‐insure against income loss. In contrast, declining house prices produce greater demands for social insurance, particularly among those most exposed to housing market risk. We present evidence from two cross‐national surveys that supports these claims, as well as a “before and after” analysis of the housing crash in Eastern Europe. We also show that the connection between house prices and social policy also manifests itself in government spending outcomes, mediated by partisan control.

To read the article via Wiley Online, please click here.